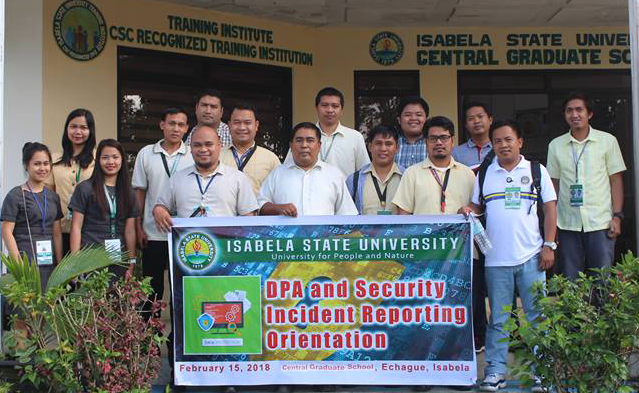 The Office of the Vice President for Planning, MIS, External Affairs/Linkages, and Public Relations conducted on February 15, 2018, an orientation on Republic Act No. 10173 otherwise known as the Data Privacy Act of 2012.

The said act generally ensures that personal information in Information and Communications Systems in the government and in the private sectors are secured and protected. The orientation also desires to guide every campus to become compliant to data privacy guidelines and to establish their Privacy Management Program required by the said act.

The said orientation was participated by Management and Information System (MIS) Officers of the different campuses of ISU.

Prof. Primitivo S. Gatmen Jr., the designated Data Privacy Officer (DPO) of Isabela State University, discussed some of the provisions of the said act and encouraged all MIS to help one another in addressing problems involved in data privacy. “As DPO of ISU, I will not be an adversary. Tulungan natin ang bawat isa na maayos kung ano man ang problema,” he said. Prof. Gatmen also said he is planning to recommend a Compliance Officer for Privacy (COP) for closer monitoring of compliance to RA 10177.

Apart from an introductory session on the Data Privacy Act, the participants were also guided in creating an Annual Incidence Report.

The Data Privacy Act of 2012 – which took effect on September 2012 – is considered as the Philippines’ first comprehensive data protection law.