The Office of the Vice President for Administration and Finance Services (AFS) is currently headed by Vice President for AFS, Atty. Romano P. Cammayo. Prior to his appointment in the said office, he served as the Legal Officer of the University with the distinction, Attorney III.

He passed the 2011 Bar Examination, and since then he has been practicing law. Before he transferred in the administrative position, he served as an Assistant Professor from 2001-2015.

Atty. Cammayo was an academic achiever: graduated as Valedictorian at Echague East Central School (1976-1982), a NCEE Topnotcher in his secondary (1982-1986) and College Scholar (1986-1990), both at Isabela State University. He took his advance studies in the same institution for Master of Arts in Teaching (2005) and Law at Isabela State University– College of Law (2003-2009), gaining Literally Legum Baccalaureus (LLB).

Mandate of the Office

Supportive to the major thrusts of the University, the Office of the Vice President for Administration and Finance Services provides an efficient and effective administrative mechanism that strengthen the implementation of management policies and practices in administrative, finance, and general services.

As it pursues the timely delivery of goods, services and infrastructure, the Office devices and implements automation of all services in the Personnel, Records Management and Finance Services towards an accountable, transparent university management system and governance. 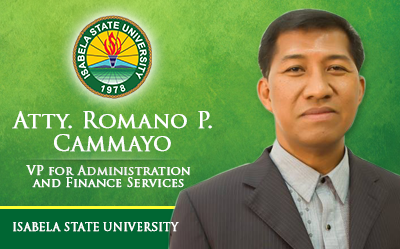