The following are the other activities conducted by the University Extension and Training.

The swamp type to which the Philippine carabao belongs is distinguished by its natural preference for swamps or marshlands. This type is primarily utilized for farm work. In the Philippines when carabaos are past their period of usefulness at draft animals they are usually slaughtered and the meat is sold as carabeef. Due to old age of the animals the meat is inferior in quality and has developed a prejudice among consumers. But when carabaos are fed, managed and slaughtered at the same age as cattle, the meat is as good as beef.

The alarming extinction and the progressive declined of our carabao population accompanied by corresponding reduction due to inbreeding and slaughter of quality bulls the Philippine Carabao Center was created to address such issue.

The Philippine Carabao Center (PCC) is an attached agency of the Department of Agriculture. Its responsibilities include implementing the carabao development program in order to conserve water buffaloes and maximize economic gains for buffalo-based village enterprises. It is also tasked to lead research and development efforts in livestock biotechnology.

PCC is mandated to conserve and promote the Philippine Native Carabao as source of draft power, meat, milk and hide. To achieve these goals, a Satellite Station for Northern Luzon, established a Genepool for Philippine Carabao Stud Farm at Isabela State University, Echague, Isabela.

PCC aims to improve the performance of the Philippine native carabao through breeding and selection. It also aims to produce animals that are superior in terms of draught power, milk and meat production.

At present, PCC had produced 10 pregnant purebred caracow and 16 yearlings with superior genetic make-up of the animals brought by breeding and selection through Artificial Insemination.

More than ever before watershed management and policy decision-making has become a more complex process as watersheds today are subject to increasing human and natural stressors. Population growth increases the demands for land, water and other vital watershed and ecosystem services that are complicated by the changing climate. Consequently, there is now greater competition between and among usually diverse management objectives that makes it more difficult to determine the best management options. From simple set of decision criteria watershed decision now has evolved into a more complex process that is based on a wider range of biophysical and socioeconomic considerations. There is now a need for a greater reliance on fresh database and information and innovative tools that will facilitate improved decision making on suitable policies and programs that will achieve multiple management objectives.

The project generated data and information through a network of Learning Watersheds that will be useful in guiding policy decisions on the kind and the extent to which various land uses and practices can be allowed in the watershed without impairing the sustainability of surface and ground water resources. It provides fresh information for a better understanding on the responsiveness of policies such as on the withdrawal of critical watersheds and watershed reservations from agriculture and other uses. The output of the proposal will also guide decisions on the selection of proper forest restoration strategies including the kind of species that are appropriate consistent with the goal of protecting the soil, water and biodiversity in the watershed. Last but not the least, the data and information from the project has been useful in determining the optimum combination of major uses of watersheds such as power generation, biodiversity conservation, flood control and irrigation.

The outputs of this project is expected to help promote secured water supply for domestic, agriculture, energy and other uses, food security, enhance resilience and stability of ecosystems and local communities, promote more sustainable livelihoods, reduced risks due to climate change, and the reversal of pervasive watershed degradation in the country. Specifically, the outputs of the proposed project will contribute in protecting the water supply in the learning watersheds as well as in more than 150 critical and priority watersheds including the 18 major river basins in the country.

The project has been implemented since March 2015. For more than a year, the team has built partnership with other agencies; conducted physical characterization of the watershed; and socio-economic profiling of the residents in the Abuan Watershed by conducting socio-economic survey. A two (2) ha. biodiversity site in Sitio Batong, Labang and erosion plots in Villa Imelda, city of Ilagan, Isabela were established and monitored. Data gathering equipment such as microclimate weather station, sap flow meter, ground water level and water quality monitoring systems were installed in the learning watershed for data validation.

Technology Promotion and Commercialization of Native Chicken in Isabela

A free-range chicken is a bird that is allowed constant access to the outdoors, with plenty of fresh vegetation, sunshine and room to exercise. Moreover, it has not been given any chemicals (antibiotics, for example) of any kind. Frequently, this type of production is called ‘pastured poultry,’ though models can vary significantly from one farm to another.

Native chicken have different kinds of breeds that exist in the Philippines include the Banaba in Batangas, Paraoakan in Palawan, Joloano in Mindanao, and Darag in Panay Island. Native chicken have the ability to look for their own foods, hence intensive production is not that much needed. Feeding them is easy as readily-available local feeds such as corn, palay, rice bran, kitchen leftovers, grasses or even insects and worms are palatable to them. They can also be beneficial for those who are planting other agricultural crops because they aid in improving soil fertility.

Free-range chicken is now extremely in demand in developed countries. The Department of Agriculture (2010), reported that there was a huge demand of meat from ranged chicken especially in big supermarkets in the Philippines such as SM which is looking for sources of said products in big volumes but they could not find a constant and reliable source. Combined productions of ranged chicken from commercial producers such as Swift Corporation, Bounty Fresh and Solraya are not even enough to fill the supply and demand gap from the growing market of chicken meat. With this problem, there is a need for the Philippines to explore for a strategy by which it could produce poultry products which are competitive for the local, domestic and global market. One of the strategies along this line is the raising of improved or upgraded native chicken for the rural farmers, hence this project was proposed.

The selection of municipalities of the province of Isabela was done by the project team. The municipalities selected were Ilagan, Angadanan, Echague and Jones. There were five farmer cooperators from each municipality were selected. To ensure the success of the project implementation, a courtesy call and consultative meeting with the local government officials and the Municipal Agricultural Officer of the four (4) municipalities was done to select the appropriate project site and the corresponding farmer cooperators. The project was initially discussed with the Chief Municipal Executive of the identified project site and as a protocol; the project was then presented during the “Sagguniang Bayan” session as a strategy to get the needed support to ensure the sustainability of the project.

A multi-purpose poultry house with fenced range was established at the research area of ISU main campus. The building served as housing for the breeder stocks and subsequent hardening prior to the dispersal program. After which the poultry house was used for the production and multiplication of breeder stocks for possible dispersal to farmers who are interested to engage in the production of upgraded chicken. The building was designed to accommodate more than 50 breeder hens with brooder pens and growing units. A fenced range/yard was also provided for the birds for growing purposes.

Objective: To establish a more systematic and organized sharing of geographically-referenced information and knowledge among network partners and promote development collaboration and coordination through data sharing and integration. 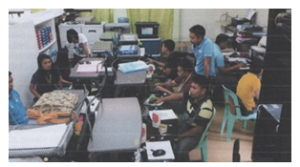 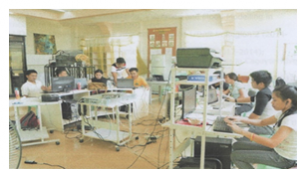