Isabela State University Angadanan Campus had its humble beginnings. Looking back, it started as Angadanan Junior High School on August 14, 1946. After one year, it was renamed Angadanan High School. The school retained its name for 12 years until the late Congressman Delfin B. Albano worked for its conversion to Angadanan Vocational High School in 1962 by virtue of R.A. 3438. The school has expanded since then in terms of enrollment and number of teachers because of its enriched curriculum offerings like Vocational subjects as major subjects–Food trades, Garment trades, Cosmetology, Auto mechanics, Furniture and Cabinet making, Drafting, Building Construction, Electronics and Electricity-thereby preparing graduates not only for degree programs but for employment or self – employment for students who cannot afford to go to College, as they have been equipped with the knowledge and skills on their fields of specialization.

Thirteen years hence, that was 1975, although the school still retained its name as Angadanan Vocational High School, it started to offer a post secondary education, a 2-year ladderized curriculum leading to the degree of Bachelor of Science in Industrial Education with the different technology subjects as areas of specialization. Some of the graduates of this post secondary education continued to a Bachelor of Science in Industrial Education (BSIE) Course at ISU Ilagan and other State Universities in Region II while others at EARIST, Manila. The rest easily found employment or opened their own shops.

The school continued to grow as years passed by  and through the collaborative efforts of the members of the Sanggunian Bayan of Angadanan, a Municipal Resolution was drafted and endorsed to the then Assemblyman Rodolfo B. Albano who immediately acted on it sponsoring its conversion to Angadanan Agro-Industrial College. This was realized on June 24 1983 pursuant to Batas Pambansa Bilang 537. The main program was on Technical Vocational Education which aimed at preparing students for entrance to and advancement in the middle level technician position in the industry. DECS Order No. 59 series 1987, authorized the offering of technical courses using the competency–based instruction.

From the time the school has become Angadanan Agro-Industrial College, significant events had transpired. The college had become one of the Regional Learning Centers in Region II, hosting the SEDP training for First Year Secondary School Teachers in Social Studies on April to May 1988. The following years from 1989 to 1991, SEDP training continued during summer from April to May for 2nd year, 3rd year, 4th year for Technology and Home Economics Secondary School teachers respectively. Since the college had been identified as a training center, it had become the favorite venue for DECS-PAVE-AVIP–sponsored seminars and trainings.

AAIC had been the Regional Production Center in the manufacture of steel tablet arm chairs, office tables, furniture and other fabricated materials. Different schools in the region, both elementary and secondary had been recipients of tablet arm chairs produced by the college.

In 1996, Associate in Hotel and Restaurant Management course was opened which added to a tremendous increase in enrollment in college. Some of the graduates found themselves working abroad where others are employed in some fine Hotels and Restaurants in Region II.

In 1999, two courses in Education, Bachelor of Secondary Education (BSEd) and bachelor of Elementary Education (BEEd), were opened with Math, PHEM, Filipino and T.H.E as major areas of specialization.

As a college, increase in enrollment was unstoppable, physical resources has been improved, additional buildings were constructed, old buildings renovated and pathways in the campus were concreted. Items for teaching positions were allotted to the college. The college has since been committed to its philosophy, mission and vision.

In 1999, The CHED Order no. 18 s. 1999 which provides the guidelines for the integration of CHED institutions (CSIs) to SUCs was enacted. Pursuant to this order the first CHED supervised institution that was integrated to the university is the Cauayan Polytechnic College at Cauayan, Isabela. In year 2002, three CSIs were again integrated into the system, namely the Roxas Memorial Agricultural and Industrial School (RMAIS) in Roxas, The Delfin Albano Memorial Institute of Agriculture and Technology and the Angadanan Agro-Industrial College (AAIC) in Angadanan, Isabela, Causing the ISU to have nine campuses at present. Emanating from a request from the Provincial Government of Isabela, the University extended its academic programs in Palanan effective First Semester SY 2005 – 2006. (University Strategic Plan 2007 -2011)

In May 2002, one of the courses proposed to be offered by the campus, the Associate in Computer Technology course was approved by the Board of Regents and so another course was added to its curricular offerings in June 2002. Another program BS Criminology was opened the following school year, June 2003.

In 2010, BSEd and BSInd’l Tech passed the Candidate Status of AACCUP.

June 2012 marks the opening of Bachelor of Technical Teacher Education (BTTE) to cater the need of the Basic Education sector particularly to respond to the need for the K-12 curriculum. This is to train future  teachers in Junior and Senior High Schools who will be offering the TechVoc strand.

In December 2012, BSEd and BSInd’l Tech passed the Level I Accreditation Status of the AACCUP and BSC Candidate Status which added to the pride of the campus.

More significant changes/developments are yet to come as the campus is trying to cope up with the ISU system and the national standards. 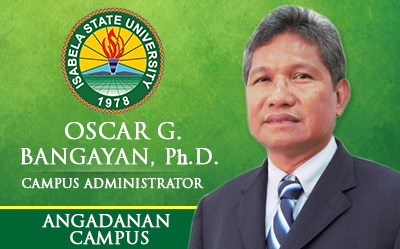