The Isabela State University Jones campus, just like any other institution of learning started from humble beginnings.

Jones Campus was then headed by the Vocational School Administrator of Jones Rural School, the late Dr. Alejandro T. Flores, who was designated as Officer-in-Charge of the Campus. A few months later, the late Ms. Fidela I. Caramancion was designated as the first College Chairman of Jones Campus in order to have a separate identity from the secondary department, although the Campus was still housed at the JRS College Building. The instructional staff was manned by the following full-time professors:  Prof. Hermogenes Baldonado, Prof. Benigno J. Domingo, and Prof. Bibiana M. Nicolas. There were also faculty members from Jones Rural School who were part-time instructors/professors in the Campus. During the term of Ms. Caramancion, a new four-year course was added – the ladderized Bachelor of Agricultural Technology (BAT), where upon completion of the first two years, the student is given an Associate in Agricultural Technology (AAT) certificate.

When the late Ms. Caramancion retired, Prof. Petronio N. Ancheta was appointed as the College Head. In addition to the part-time instructors/professors from the Jones Rural School, some members of the instructional staff from the Main Campus also assisted in handling some subjects in Jones.

Upon the retirement of Prof. Ancheta, Prof. Julio T. Figarola took over as Head of the Campus. Feeling the waning popularity of Agriculture courses, a two-year academic preparatory program was added to the course offerings of the campus. This was the two-year Associate in Science (AS) program – a general preparatory course. Due to the increase in enrollment, two additional full-time professors were assigned in the Campus – Prof. Lucena M. Flores, a Social Science professor and Prof. Paulita A. Manaligod – a Language professor. Part-time instructional members continued to extend their expertise.

When Prof. Figarola retired, Prof. Ernesto F. Juan became the College Chairman. Prof. Juan headed the Campus until when Prof. Diosdado R. Basug was appointed by the University as the new College Chairman. The enrollment of the Campus continued to increase and the need for a separate school site was urgently felt. It was during the incumbency of Prof. Basug that negotiations were started to have a separate land area for Jones Campus. With the assistance of the other members of the faculty and staff of Jones Campus, a two-hectare lot was donated by the Municipal Government under the leadership of the late Mayor Jesus T. Sebastian, Sr. This lot is a part of the original five-hectare college Farmville that was used by the College Department of Jones Rural School.

Because of his desire to grow professionally, Prof. Basug went for study leave in June 2000. The leadership of the Campus was given to Dr. Paulita A. Manaligod as the new Executive Director. It was during this year that the Campus finally left the Jones Rural School to occupy the new College Building at the northeastern part of the national highway. Construction of building continued because of the yearly increase in enrollment. From the original four-classroom building in 20000, the Campus had four classrooms added in 2002. It was during the incumbency of Dr. Manaligod that additional  degree courses were added to the offerings of the Campus – the Bachelor in Secondary Education (BSE) and the Bachelor of Science in Information Technology (BSIT), and Bachelor of Arts in General Education (AB). As a result of continuous career campaign in various high schools, enrollment for the first time surpassed the centennial mark.

Upon the retirement of Dr. Manaligod in November 2004, the Campus was given to Dr. Joel L. Reyes as its new Executive Director. Filled with dynamism, the academic staff has been added to the roster of personnel. A Cyber-Library, a four classroom academic building and additional two-classroom building were established through his able leadership to house the students whose population dramatically increased five times the original number since 2004. In addition, the Campus can now boast of several projects as show-windows of the continued rise to fame and popularity of Jones Campus.

During all these years of its existence, Jones Campus has never been left out in competitions in research, extension, instruction and socio-literary, not only within the University System, but also with other branches of government and other educational institutions.  The results in board/licensure examinations for Teachers and Criminologists of the campus, being consistently higher than the national passing percentage, prove to have the campus metamorphosed a lot from its humble beginnings. 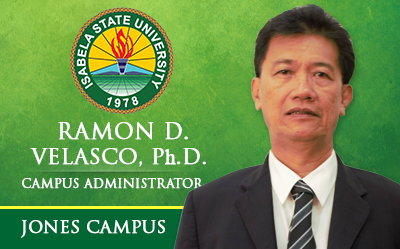