The Isabela State University at Cabagan is an institution of higher learning whose vital rule is to provide quality education designed to prepare men and women who can meet the imperatives of country side development.

Pursuant to Presidential Decree No. 1434, the Isabela State University at Cabagan, working hand in hand with the other units/campuses, strives to serve as ‘an instrument toward the rapid  development of the natural and manpower resources of Region 2, particularly of the Province of Isabela.”

The establishment of a state university in this part of the Cagayan Valley region dates back to early 1916 when the Isabela Farm School, operating on the elementary level was opened and converted later into Cabagan, Rural High School which continued to exist until 1937. Thereafter, its operation was reverted to the elementary level under the name Cabagan,  Farm School  and persisted long after World War II.

In response to popular demand for the re-establishment of a high school in the locality, Cabagan High School was finally opened in 1950. It operated under the financial support of the provincial government of Isabela until its conversion into Cabagan National Agricultural School in 1958 by virtue of Republic Act No. 1989. Offering secondary agriculture and secondary homemaking curricula for boys and girls, respectively, this school became the forerunner of what was to become a state college, the Cagayan Valley Institute of Technology (CVIT).

On June 18, 1961, the Cagayan Valley Institute of Technology was established by virtue of Republic Act No. 3442. Sponsoring the CVIT’s  conversion into a state college were former Congessmen Delfin B. Albano, Leonardo B. Perez, and Benjamin  T. Ligot of Isabela, Nueva Viscaya , and Cagayan, respectively . The College charter provided among other things, the offering of secondary general and vocational courses as well as collegiate agricultural courses, On July 1, 1963, the Institution started to offer collegiate classes.

Fully aware of its leadership role along the major thrusts of education for regional and national development, the Cagayan Valley Institute of Technology has steadfastly joined the trend towards restructuring higher education and redirecting its goals until its recent conversion and integration into a state university on June 10, 1978, by virtue of Presidential Decree No. 1434. Over the years, the institution has been functioning to provide a kind of education and training that can turn out competent and qualified manpower through its educational, research and extension programs.

Today the Isabela State University at Cabagan, in the process of development assumes numerous and comprehensive functions in providing necessary training and expertise in the sciences and technology and also provides technical assistance to communities through its research and extension components. 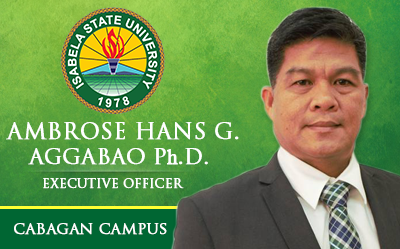