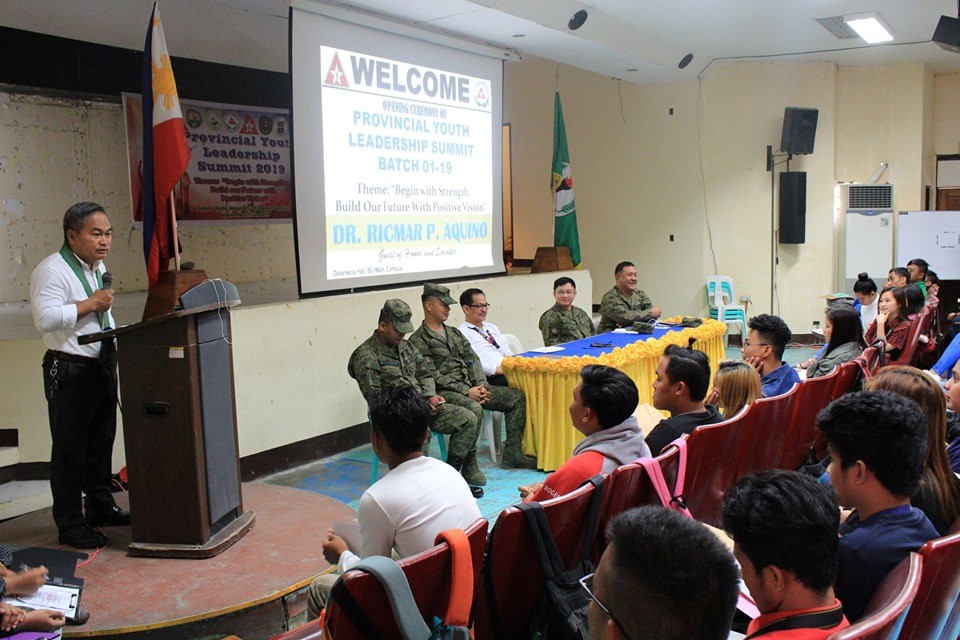 The leadership booth-camp aims to provide additional background of leadership, empowering social and civic sensitivities, and boosting awareness on Communitst Terrorist Groups (CTGs). Colonel Ferdinand Lazaro D. Budeng, Officer-in-Charge of 502IBDE reports, “there are people who infiltrate campuses, universities to radicalize the minds of the young”.

This is after intelligence reports confirming cases of exploitation of youths in participating insurgency efforts against the government.

Col. Budeng called the number of youths in the region “humongous”, reporting the 885,862 youth population in 2010 census.

He says that the 150 participants today, which is “roughly 0.01% of the population… cannot possibly lead this huge population, but can start leading the youths in [their] respective areas, that ‘a leader is one who knows the way, goes the way, and shows the way’”, quoting John Maxwell.

The colonel furthered, “this is a training program, and definitely it will not transform you into an overnight leadership guru but at least it will give you the idea on how to lead the youths in your respective areas.”

ISU, being the leading State Universities and Colleges (SUC) in the region, supports the initiatives that empowers youths as responsible members of the society.

In his speech, Vice President for Planning Dr. Juanito Rosini, expressed the academe’s participation in lowering the number of youth students being recruited by CTGs. He also cited examples of some country’s failure upon embracing communism.

Before ending, Dr. Rosini challenged the student leaders, “the best thing you can do now is to finish your studies.” According to him, this will be their leverage upon “welcoming many opportunities”, and will in turn contribute to nation-building.

The three day activity will conclude on September 22.