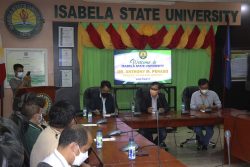 Caraga State University President Dr. Anthony M. Penaso expressed that ISU’s recent achievement being the recipient of the PQA not only Level I- but Level II, would harness their preparations for the nationally-sought award.

“ISU would be very instrumental in our quest to PQA. We learn so much from other SUCs, that’s the best way to elevate our institution”, says Dr. Penaso.

“You brought so much laurels to ISU. That’s the legacy an institution would get from a visionary leader”, Dr. Penaso added.

Dr. Aquino assured that the academic community of ISU will be supportive of their quest, as schedules were laid down for upcoming consultation and mentoring.(GZ/BJC/JF-UMIS-CMS)