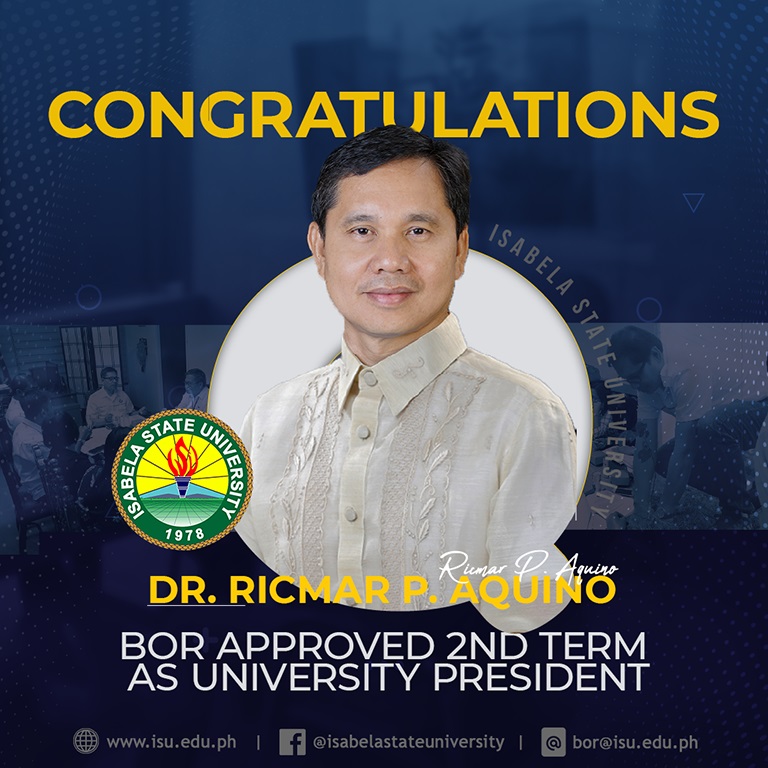 The Board of Regents (BOR) of Isabela State University has unanimously approved the 2nd term of Presidency of Dr. Ricmar P. Aquino, in a Special Board Meeting held this afternoon (May 14).

This after the endorsement of the Evaluation Committee for the ISU Presidency (ECP), which found Dr. Aquino’s performance as University President to be “Outstanding” on the three pillars of performance indicators: as an Academic Leader, Institution Builder, and as a Resource Mobilizer.

The overall finding was from the rigorous evaluation conducted by the ECP thru the following processes: (1) Review of Executive Reports and Pertinent Documents, (2) Online Survey, (3) Focus Group Discussions; (4) Ocular Visit to ISU campuses, (5) Virtual Public Forum, and (6) Panel Interview.

The ECP was created by the ISU Board thru Resolution No. 402 s. 2020 to determine the qualifications of the President for reappointment, following the latter’s intention to seek for a second term of office.

This is in line with CHED Memorandum Order No 16, s. 2009, which provides that “no incumbent President shall be re-appointed without undergoing an evaluation of his/her performance by an Evaluation Committee constituted by the Governing Board”.

Dr. Aquino first was appointed to the leadership post on May 20, 2017, which is set to expire on May 19 this year.

With limited public mobility and social gathering protocols in view of the pandemic, the ECP has adopted an online mode in the conduct of its evaluation. As such, video presentations of ISU Campuses were set for viewing in lieu of the scheduled ocular visits.

The ECP was chaired by Dr. Lisa Grace S. Bersales, Vice President for Planning and Finance of the University of the Philippines.

Highlights of the ECP Findings

Majority of the respondents from the evaluation instruments were agreeable to the positive performance of the President. The respondents were composed of University Officials, Administrators, Campus Heads, Deans, Faculty members, Non-teaching Personnel, Students, Alumni, and External Stakeholders.

For the eSurvey, about 15,000 addresses were collected and forwarded to the MIS Office, and were provided of the survey questionnaire. The eSurvey yielded the President’s performance with a general rating statistically equivalent to “Outstanding”.

The ECP’s dialogue with the University’s stakeholders thru the FGDs provided the evaluation with qualitative data. Overall, the President maintained a positive impression from the respondents. There was a total of 6 FGDs conducted from April 14 and 16, with about 12 representatives each from the sectors.

The President narrated his four-year accomplishment report (2017 to 2020), along the framework of his future plans, in a virtual public forum held on April 20, 2021. The Public Forum facilitated question-and-answer engagement with the President and the University’s stakeholders.

And lastly, the ECP conducted a final interview with the President to consolidate the feedback and clarification among the rising issues, concerns, and information gathered from the eSurveys, FGDs, and the Public Forum.

ISU in the first 4 years under Dr. Aquino’s Leadership

Dr. Aquino reflected on his presentation, during the public forum, his first term accomplishments, alongside his plans way forward.

He first highlighted the status escalation of ISU as SUC Level IV, making the University a prime academic institution in the countryside thru the performance in its four thrusts: Instruction, Research, Extension, and Resource Management.

In terms of Instruction, he pointed out the growth of curricular programs offered by ISU, their constant accreditation, and Certificates of Program Compliance (COPCs) from CHED. President Aquino also noted on the mainstreaming of climate change and disaster risk management, data science analytics, entrepreneurship, and design thinking into curricular offerings toward catering the needs of the industry.

This is a distinction accorded to a program offering which demonstrates exemplary performance in the delivery of instruction, research and publication, extension and linkages and institutional qualifications.

In addition, Dr. Aquino highlighted the research and development (R&D) engagements of ISU as it journeys onward its vision as a research university, which have named ISU as the R&D hub of Region 02.

As the President explained, this is largely attributed to the redefining of ISU R&D Strategic Plan, which saw the rise of 21 R&D Centers under his first term. Dr. Aquino further remarked, the thriving of R&D centers spurred number of research outputs, including 25 technologies developed that are responsive to the needs in agriculture- particularly on SMART agriculture, livestock production, farm machineries, and food products.

Dr. Aquino went along to explain ISU’s collaboration with institutions and agencies in the country and abroad, saying such partnerships have fostered sharing of resources, pool of experts, and R&D venture.

Among its active partnerships include the on-going water studies with Kyoto University, Japan. Most of international linkages come from ASEAN countries, with some in Europe, like the Howest University in Belgium.

Dr. Aquino has also presented his future plans for ISU, which would be centering on the Smarter University framework.

“The Isabela State University as a Smart University embraces innovations and e-governance in various aspects of instruction, research, extension and resource management”, the President said.

He says: “these aspects are interconnected to provide dynamism in the process toward the core of Smart University with a wholistic approach strengthened by the university’s major thrust”.

The President further explained that the Smarter University framework would allow ISU to ride on with constant changes, which he referred to as “a real critical point across multiple university systems”.

“The presented vision of a smart university is an effort to provide efficient platform in achieving ISU’s vision-mission, that responds to the students’ needs in a sustainable, social, and technological way”, Aquino concluded. (JF/GZ/BJC-UMIS-CMS)