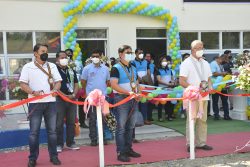 New initiatives to propel science, technology, and innovation (STI) in Cagayan Valley are now set to stage as support from the national government came with the visit of the Department of Science and Technology Secretary Hon. Fortunato T. Dela Peña (March 25).

The DOST Chief attested to the opening of the first-ever Smart and Sustainable Cities Day which has seen the signing of partnership agreements for the establishment of major Research and Development (R&D) niches in the region including textile and smart water management.

Isabela State University would serve as the converging hub of the 3 R&D Centers to rise, including the Regional Yarn Production and Innovation Center- the second of its kind in the Philippines; the Smart Water Infrastructure Management R&D; and the country’s first and only United Sustainable Development Goals Center.

The first ever Smart and Sustainable Cities Day was organized by the City Government of Cauayan, with ISU and DOST-Region 02 in the line, in its bid to foster the growing S&T engagements in the locality with its Smart City initiative and glocalization efforts.

“The collaboration here between the government agencies, the universities, local government unit, and the private sector is really very very strong and productive- and this is the best example not only of whole government but whole of nation approach”, said Secretary Dela Peña. 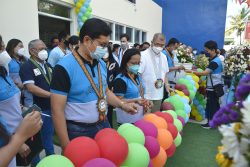 The DOST chief then turned to commend the leadership of ISU President Dr. Ricmar P. Aquino, noting of ISU’s plight under his stewardship.

“I must say that within the very short period of time President Ricmar has taken over the leadership at ISU, there were so many new programs and new partnerships and new infrastructures that we have seen. I think they have scored high in terms of getting support from DOST, whether we are talking of smart water infrastructure, whether we are talking of textiles, aquaculture, Health Guard, hybrid electric train, and many others”, exclaimed Dela Peña.

“The initiatives and projects mentioned are manifestation of strong collaboration among S&T partners and stakeholders, locally and internationally- who believe and stood firmly with us in achieving inclusive and sustainable development in the region thru science and technology and innovation. Together, let us continue to create a better Philippines amid this pandemic”, said Director Virginia Bilgera of DOST-R02.

A milestone considered for the scientific community, March 25 would now be marked as the Smart and Sustainable Cities Day for Cauayan City.

“We are also privileged, as mentioned by Mayor [Bernard] Dy, we are marking March 25- and it was March 25, 2015, seven years ago, my predecessor Sec. Mario Montejo declared that Cauayan is the first Smart City in the Philippines”, says the DOST chief. 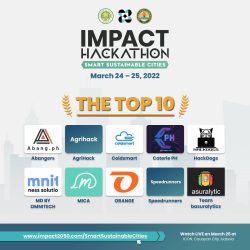 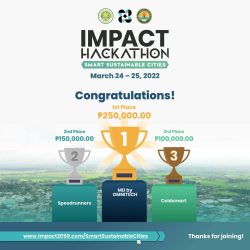 The first Smart and Sustainable Cities Day also showcased prototype programs developed by participating IT programmers and developers in the Impact Hackathon 2022, where two of ISU’s contenders were awarded.

MD by OmniTech champed the program development, with Team ORANGE being shortlisted among the Top 10 Best IT Programs. 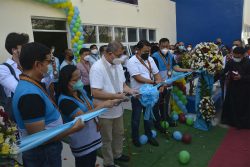 “The SDG that we have inaugurated, is a very significant step in highlighting our adherence towards the achievement of SDG”, remarked Dela Peña on the launching of the newly established United Sustainable and Development Center at Isabela State University- Cauayan Campus.

The USDG Center is being eyed to hasten the glocalization of United Nation’s SDGs not only in the region, but the country at large.

In doing so, the center can serve, explained Dela Peña, as an “incubation center for start-ups that will be working on technologies supportive of the SDGs”.

“It is indeed a very innovative idea, again another innovation from President Ricmar of ISU”, said Dela Peña.

The USDG Center would come to be the first and only center in the Philippines that would cater to the implementation and localization of UN SDGs. Dela Peña notes: “the SDG that we have inaugurated, is a very significant step in highlighting our adherence towards the achievement of SDG”.

Dr. Kristian Mjoen, co-founder and representative of United Cities International Projects, explains that cities and communities can actually thrive from pursuing the smart and sustainable city status, which is a promise that is yet a rising trend among countries in the globe.

“As you might know, there is a huge investment gap globally when it comes to financing smart and sustainable cities, especially the SDGs in general- estimated to around 3 trillion dollars. The good news is that the conservative return on these investments is estimated to be at least ten times this amount. So, what you are doing here, Mr. Bernard (Mayor), is very very interesting for the future prosperity of Cauayan”, narrated Dr. Mjoen.

The establishment of the USDG Center is the first of the four-phased roadmap collaboratively laid by Cauayan City, ISU, and United Cities International.

As Ms. Seok Mei Goh of the United Cities expounded: “The first step is the USDG, with TBI. The second is to have a Renewable Energy Net Zero Prosperity. For Phase 3, we will look at innovative agriculture and technologies. And Phase 4, we want to make Cauayan a global SDG hub- [t]he first step of many years to come”. 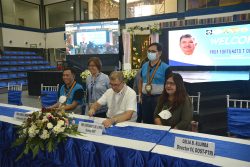 Dignitaries to the Smart and Sustainable Cities Day also formalized partnership to work on the Textile Industry in Cagayan Valley thru the Regional Yarn Production and Innovation Center.

The Center is set to be housed at Isabela State University- Ilagan Campus, which already secured a DOST-funding support amounting to 40 million pesos.

Second to Iloilo’s, the center will cater to the textiles and fibers produced by weavers especially to those of the indigenous- a strengthening of both culture and commerce.

The Secretary noted how the experience from Iloilo revitalized the native’s garment pride hablon, which previously faced cultural challenges due to some cases in the importation of raw materials.

“The weavers told us it came to a point that they were no longer proud to say that they were the source of hablon, because they said we were already importing the materials that we were using for weaving- and are not proud of that. And so, when we start the center, buying the cotton, and the pineapple leaves and the banana fibers, raw materials from our farmers converting them into yarns. These are the materials that the weavers are using, they can now proudly say our hablon is really coming from here, coming from our own raw materials, and woven by our own people”, told Dela Peña.

Director Celia B. Elumbra of DOST’s Philippine Textile Research Institute explained that the regional centers are key players in assisting both the growth of local enterprises and the entire industry as a whole.

“The goal really is to go from centralized to regionalized the center of operation, from vertical to localized, utilize local resources to generate hundreds of jobs, create local textile innovations and enable an ecosystem towards the creation of higher value products”, says Ilumbra.

She adds: “overriding that is this idea or this advocacy that we call TELA Pilipinas. TELA is an acronym for Textiles Empowering Lives Anew. So, this means that wherever the source of material is, that is where you would like to see the transformation into an input material that can go into the spinning process, that can then go into the weaving process, into the production of the materials downstream”.

DOST-PTRI has an on-going partnership with Technical Education and Skills Development Authority for accrediting weaving as a trade thru an NC II Certification.

The Regional Center will be reinforced by the textile hub that will be established one at Apayao State College, and another which is the Bamboo Textile Fiber Innovation Hub managed by ISU-Cauayan. 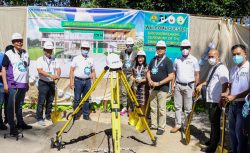 “Water management would only be the baseline for continued sustainable value creation, and spinning off from there you will see lots of initiatives”.

Dr. Mjoen of United Cities believes this to be the critical role played by the upcoming Smart Water Infrastructure Management R&D Center as to all the initiatives mentioned.

Right after the opening at Cauayan City, dignitaries went to witness the groundbreaking ceremony of the said center at ISU-Echague Main Campus.

SWIM R&D was ISU’s response to the recurring water hazards brought by extreme climate conditions frequently affecting the Cagayan River, the longest river in the country.

At first, DOST Secretary Dela Peña told he wasn’t able to grasp the picture of SWIM, recalling the successive meetings of ISU with the partners from Kyoto, Japan “a series of conferences” until the typhoon Ulysses.

“So, after that, SWIM was formally conceptualized here at ISU. And it became, to me, a more concrete thing after I have seen the projects that were proposed. It covers a wide range- from planning, infrastructure, GIS, to irrigation management, which are all very very important”, narrates Dela Peña.

The professor went on to stress the center’s role in converging efforts of government agencies working on their respective niches.

“In the planning side of our water infrastructure, there was no interaction with other sectors. As we do it here, we do it in our own area. DPWH plans on their own, DENR plans on their own. Et cetera. But as we see the planning that is required now should be the so-called whole of the government approach. So, it became clearer to me what was SWIM”, the secretary added. 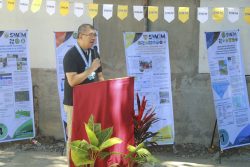 Dela Peña also shared that the center is pivotal to the interfacing of instruction and research, which constitute the opening curricular programs related to its research fields.

“So, to me, what remains as far as I’m concerned, is to elevate the academic program offerings to such a level that we can, at the DOST side, it will be easy for us to accredit this particular center and the academic programs that will be offered, I believe, by the ISU College of Engineering. So that ISU Engineering itself will be a delivering institution for MS, and eventually PhD programs in water resources and management”, said the professor.

“Now one thing that was mentioned was the bill because that will be important for the sustainability aspect. While we have given an initial support thru NICER, this is not going to be a forever thing. And therefore, the sustainability aspect is important, the legislation would be very important”, referring to the proposed bill institutionalizing SWIM as National Center for Water R&D. 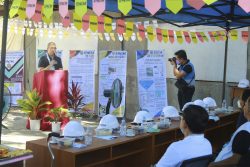 He added: “it is very good that the congressman from the 6th District (Isabela), Congressman Inno Dy, is an active member of the S&T Committee at the House of Representatives, and I’m sure he’s going to be very influential in this coming new congress”.

Dr. Glen Tabios, a retired professor at UP College of Engineering, will be joining the roster of researchers at the said center.

“I’m glad that you were able to convince him to come here as an R&D leader, because he has a big network which he can bring in to ISU”, the secretary mentioned.

The retired professor has also been affiliated to the UP National Hydraulic Research Center.

“We did not really take it so easy in preparing for the proposal. But because of the strong unity and cohesiveness of all our partners from ISU, CSU, and QSU, I think this is the first collaborative NICER project in the entire country today. I am very thankful to our honorable secretary and the entire DOST family for the strong support to ISU”, says Aquino.

The President also claimed that the center is “part of the UN SDGs”, linking to ISU’s plight towards Times Higher Education Impact Ranking.

“I’d like to inform you that we’re now cascading the UNSDGs, and be mainstreamed to all our programs and projects”, he added. (GZ/BJC/JF-UMIS-CMS)