Right after the Second World War II, the people of Cauayan stood from the ravages of war and rebuilt the municipality to become the most progressive town in the Province of Isabela. Fully aware of the need to educate its children, the Cauayan Junior High School was established on November 23, 1945 with the first and second year classes.

The following year proved to be a big “blast-off” for the secondary in June 1945 the school began to offer the complete general secondary course. More members were added to its faculty and staff. It is also in this year when two loving and generous citizens by the name of Pablo Rivera and Juan Dacanay donated a total of 78,274 square meters of their adjacent lot in barangay San Fermin (present site) to give the school a permanent place in the community.

After 17 years of fruitful service to society, the Cauayan High School was converted into National Agricultural School by virtue of R.A. 3323 on July 19, 1962, changing the name to Cauayan Rural School.

On the other hand, the College Department since it started operating in 1975 has been offering the two-year Post Secondary Agricultural Technician for males and Home Arts Technician course for female students.

Having duly qualified and classified as Technical Vocational School has been granted permission to offer the two-year Food and Beverage Preparation and Service and the one-year course in Home Industries (Apparel Making) upon the start of classes in June 1990. With this development, the college grew to meet the developmental goals of the government.

In February 23, 1995 marked another landmark when Cauayan Rural School was converted to Cauayan Polytechnic College. In this year, the offering of Teacher Education and other additional courses were granted permission.

In October 1999, pursuant to CHED Memorandum Order No. 18, S. 1999, BOR Resolution No. 3, S. 1999 was passed approving the integration of Cauayan Polytechnic College, Cauayan, Isabela to the Isabela State University.

Since its integration to the Isabela State University System, Cauayan Campus has manifested remarkable changes not only in terms of population but also in infrastructure, school buildings, equipments and modern facilities and program offerings. Bachelor of Science in Information Technology (BSIT) is its flagship program. Bachelor of Science in Hotel and Restaurant Management (BSHRM) is its emerging program and Teacher Education (BSE and BEED) and Bachelor of Science in Criminology are its developing programs including the College of Law which produced full-fledged lawyers.

Today, Cauayan Campus ranks over the mother campus in terms of population. With its strategic location and the concerted efforts of its faculty, staff, students and strong support of the University Officials not discounting those from the city government and other civic spirited Cauayeños, Cauayan Campus is becoming a premier seat of learning where students find achieving their dreams of a global career very possible. 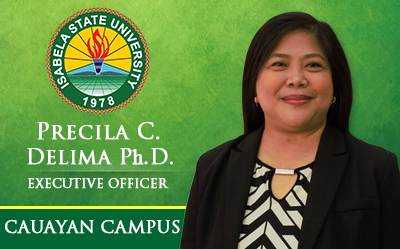